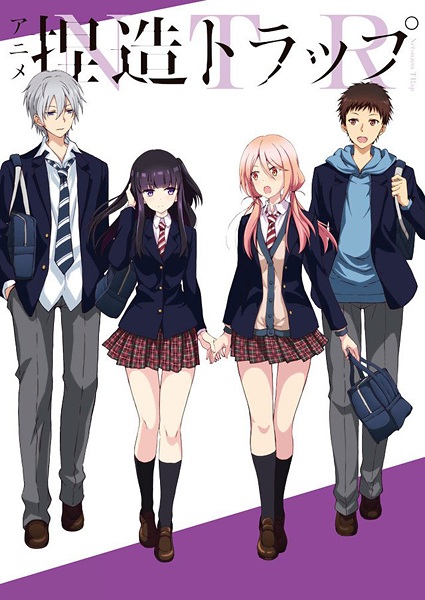 Childhood friends Yuma and Hotaru have been inseparable for as long as they can remember. So naturally, when Yuma suddenly enters her first ever relationship with her new boyfriend, she runs to Hotaru, seeking advice. However, instead of giving Yuma the advice she’d hoped for, Hotaru instead offers to give Yuma some “practice” and begins coming onto her. With both girls having boyfriends of their own, and hiding the secret, sexual relationship they share behind their backs, will the two girls be able to move past this situation? Or will they fall deeper into a world of lies and cheating?

Scum’s Wish is one of my all time favourite Manga and its recent Anime adaptation that aired back in the earlier Winter season of this year has wound up becoming one of my favourite shows.

Netsuzuou TRap is another one of my all time favourite Manga series and it tackles a very similar subject matter, albeit with a more Yuri-centric approach to the idea. As such, I’ve had high hopes since this adaptation was first announced, that it would have the potential to give me a similar experience.

And I’m happy to say that judging from this premiere episode, the chances of Netsuzuou TRap being amongst my favourites of this season are pretty high.

There’s really not much to the shows story. It’s a series about two girls that are childhood friends, both in relationships with guys, but they’re secretly “practicing” on one another behind their boyfriends backs. The dark “twist” however, is that one of the girls, Hotaru is practically forcing the situation on the other girl, Yuma, for reasons that aren’t quite clear.

It’s a very unsettling story that’s bound to make the average viewer uncomfortable, perhaps even upset or angry, and that’s precisely what I find appealing about it. As I’m sure many of you already know, I love unsettling, messed up stories that focus on the darker side of human nature. Oyasumi Punpun and Aku no Hana are my two favourite Manga, and both have similar, dark narrative focuses like this.

The sense of atmosphere in Netsuzou TRap is strikingly similar to those. It’s unsettling, it’s uncomfortable, it feels wrong and it’s great.

And pretty much all of this stems from the contrasting personalities of the two main characters, Yuma and Hotaru. Yuma is a goody two shoes. She’s a very reserved and innocent girl who clearly loves her newly acquired boyfriend very much and wants to engage in a serious relationship with him. But her shyness is also her biggest weakness and causes her to doubt her ability to take “steps” in her relationship. Hotaru on the other hand is quite the opposite. She’s a very outgoing, manipulative and twisted individual with a very self serving agenda and for whatever reason she’s taken advantage of Yuma’s innocence and shyness and more or less forced herself on her. And Yuma, due to her aforementioned good girl nature, doesn’t know how to react or refuse.

Just what is Hotaru’s agenda? What is she up to? Does she actually have feelings for Yuma but is unable to find the proper means to express them? Or is she just a twisted bitch who wants to play around with peoples feelings? Her motivations are intriguing to say the least, and it’s clear that there’s a lot more to this show than what’s simply displayed on the tin. Many are likely to take a glance at Netsuzou TRap and assume it’s just edgy, softcore Yuri hate-porn, but I believe there’s a much deeper and interesting beast here.

That being said, this initial episode wasn’t perfect and did have quite a few issues, the major one being the pacing.

Unfortunately, Netusuzou TRap is being adapted as a short form series, with the episodes being only 9 minutes long. This isn’t inherently bad, but from this premiere episode it was evidently rushed, with a lot of the Manga’s build up to the central narrative focus being more or less glossed over or skipped entirely. As soon as the show begins, we’re instantly thrown into the story, with no idea who these characters are or what their situation is. One could argue that jumping straight into “the point” is a good thing, but for me personally, it felt a little jarring. Hopefully the later episodes in the series don’t feel as rushed. That’d be nice.

Then of course, there’s the art and animation. The show is being handled by the studio Creators in Pack who aren’t exactly well known for their expertise in the field. Their most famous work is the disaster that was last year’s Bloodivores, a show that looked, for the lack of a better phrase, absolutely terrible. Thankfully, Netsuzou TRap doesn’t look anywhere near as awful as Bloodivores. The character designs are pretty great overall and the general aesthetic, while nothing mind blowing, is perfectly serviceable. However, the animation is fairly awkward at a lot of points and there are many moments where those very appealing character designs go a little off model and look a tad weird.

As a Manga reader though, I can assure that a lot of the issues with the artwork are to do with the source material. The Manga was never particularly noteworthy for its artwork beyond the characters having great looking legs, so it’s likely a lot of the off model character designs are a result of adapting the source pretty faithfully.

However, despite the visual hiccups, it does very little to detract from the experience. The visuals are a minor component of what is primarily a character driven series, so I’m honestly not all that bothered.

The soundtrack of the series is fairly limited so far, but considering the episodes are 9 minutes long, it’s not much of an issue, and what we have been given does an excellent job at conveying the tone of each scene. The opening theme is also fantastic, and when accompanied by the opening sequences, it expresses the unsettling nature of the series’ focus brilliantly. Damn, that opening sequence is incredible.

Perhaps it’s due to my familiarity with the source material or my penchant for gravitating towards anything that’s the slightest bit messed up in its narrative focus, but I really like this show. It’s one of the best shows I’ve seen from the season so far, and if it manages to adapt enough of the source material within its projected length and keeps this level of quality up, it has the potential to become one of my all time favourites.

The series is most definitely not for everyone. Heck, I’d even be unlikely to recommend it to the average viewer simply because of how disturbing and awkward the whole experience is. But if you’re a messed up individual such as myself who enjoys dark, fucked up stuff, perhaps you’ll find something worthwhile here.

Or not and I’ll be the only person championing this show. It seems I get one of these every season.

What are your First Impressions for Netsuzou TRap?