This is part of a Retrospective that covers the entire bands discography. You can find the post for the previous album here. There’s also an introduction and disclaimer that you can read here, that I strongly suggest you start out with.

So this time around, we’ll be covering not one, but two EP’s that were released by Blood on the Dance Floor in 2009, after their first EP I Scream I Scream. Why are we covering two this time? Because honestly, there’s not an awful lot to talk about with either of these releases. They’re both pretty short and are probably the most inconsequential releases in the bands entire discography, outside of the last EP they released in 2018 which we’ll get to. Eventually.

If anything, the only notable thing about these releases is that they feature the last material that Garrett Ecstasy would record with the band, as he left towards the end of 2009 due to complications between himself and Dahvie. It’s not exactly clear what happened between the two, but an archived MySpace post from Dahvie claims that Garrett was heavily involved in drugs, would constantly disrupt recording sessions due to said drugs and that he apparently deleted all of the recorded material for their then upcoming third studio album OMFG. As far as I’m aware, Garrett has never publicly stated why he left the band, and the only recent mention I could find of him anywhere was in the recently published Huffington Post article covering the assault allegations against Dahvie, where he supposedly backed up one of them with his own testimony. But who fucking knows?

Regardless of what actually happened however, it’s a shame that Garrett left Blood on the Dance Floor so abruptly. I feel his vocals worked very well with Dahvie’s, with I Scream I Scream being some of the best material the band has ever recorded. And while these two releases aren’t quite on the same level, and are pretty inconsequential for the most part, they’re a sign of what could have been had Garrett stayed in the band, particularly the first one we’ll be talking about.

But with that all said… Let’s get into these two EP’s, shall we?

So first we have OMFG Sneak Peek, which is essentially just a short demo EP containing 4 tracks that would have been featured on the bands then upcoming third studio album OMFG. However, after Garrett left the band later that same year, this album was scrapped and rebranded Epic, with some of the material completely scrapped and other songs re-recorded with Jayy Von Monroe, who would go on to be Garrett’s replacement.

And that’s partially why this release feels a little pointless to go back to. Two of the four tracks, Lookin’ Hot Dangerous and IDGAF were re-recorded for Epic and while these demo versions of the songs aren’t bad, they’re definitely a lot weaker and feel pretty unpolished compared to the final recordings featured on the full studio album. And to top it off, IDGAF is one of the weaker songs on Epic anyway, so a worse version of that song just… Isn’t really all that worth listening to. At all.

As for the other two songs, we have the opening track Well Suck Me! which is actually pretty great and super catchy, with some absolutely incredible screaming vocals from Garrett in the background. But unfortunately the song just doesn’t have much staying power because it’s too fucking short, only clocking in at around a minute and a half long. I’d have much preferred it if it were a full 3 minute song, but I will say it’s a shame a re-recorded version never made it on to Epic as well.

And finally, we have the fourth track, It’s Happening which is actually the strongest track on the entire EP. It’s super upbeat, super catchy, has a memorable, energetic chorus and the intro with the vocalised “BOTDF” is pretty damn cool, in the lamest way possible, if that makes sense. If anything, this one track is the one reason to give this EP a shot, as it’s a good length, is a good song, and this is the only place you’ll be able to find it, as it was never re-recorded for Epic.

Honestly, I rarely find myself going back to this one, outside of It’s Happening and occasionally listening to Well Suck Me! for the really great screaming vocals. It’s pretty average as far as Blood on the Dance Floor releases go.

And now, here’s some track ratings for you all:

OMFG Sneak Peek is an interesting little peek into what could have been, but it’s ultimately not all that worth listening to in my opinion. With a short as hell opening track, and two tracks that are just inferior, earlier versions of songs that can be found on the bands next full length release, there’s really only one track here that I would consider great. If you’re curious, then by all means give this one a listen, as it’s pretty short, but unlike the bands previous EP I Scream I Scream, there’s nothing outstanding here to make it a must listen. You can safely skip this one I’d say. 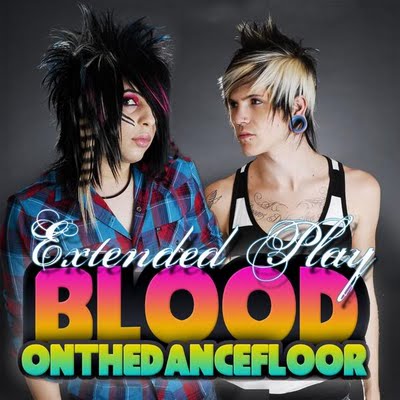 Alright, so here we have it. This is by far the bands most inconsequential and forgettable release ever, besides maybe their 2018 EP You Are The Heart, but we’ll get there later on in the retrospective.

Honestly, there’s not all that much I can even say about this EP. It’s only two tracks long, and one of them is a cover of the Michael Jackson song Beat It. Yes, you read that correctly. Blood on the Dance Floor did a cover of Beat It. Is it good? It’s alright I guess. Kinda funny honestly. Nothing I’d listen to on repeat or anything, but just the idea of Dahvie Vanity singing a Michael Jackson song is really fucking hilarious to me. Outside of the surreal wow factor of this existing though, it’s not that great…

Then we have Crunk Man which is an incredibly forgettable song that I’ve only listened to a handful of times, made even more forgettable by the fact that it was re-recorded with Jayy Von as a single later in the bands career, so even then, there’s a better version of the song out there. There’s no real reason to listen to this. At all. It fucking blows. And I say that as someone who mostly loves this stupid band.

And now, here’s some track ratings for you all:

I wouldn’t bother unless you’re a completionist. There’s really nothing worth checking out here, outside of hilarity that Dahvie Vanity recorded himself singing a Michael Jackson song. But… Nah. Skip it.

Next time we’ll be stepping away from EP’s and jumping back into the bands studio albums, with Epic, the bands third full length release and the first to feature Jeremy Brian Griffis, otherwise known as “Jayy Von Monroe” on backing and screaming vocals. The album is pretty noteworthy for containing some of the bands more iconic songs, as well as featuring a whopping 22 tracks (40 if you include the Deluxe edition with the bonus tracks). And we’ll be covering the lot! Is it an improvement over these mediocre releases? We’ll see!