Disclaimer: Despite the title and subject matter of this post, this is one of those ones that got pretty personal. This is more of a self-analysis, but I hope you enjoy it regardless.

Ever since the sequel to The Legend of Zelda: Breath of the Wild was teased in a small trailer at E3 earlier this year, Majora’s Mask has become quite the talking point again within the Zelda community, and for good reason.

After all, the trailer for this new Zelda game is a lot darker in tone to what we’re used to seeing from the series, and is very reminiscent of the spooky and some what unsettling atmosphere of Majora’s Mask. From the dark colour palette, to the creepy sounds, everything feels very… “Majora”. Aonuma himself even went as far as saying that this sequel will be “darker” than Majora, which has many fans, myself included, very excited to see what kind of game we’re going to get. Darker than Majora’s Mask? I’ll believe it when I see it, Aonuma.

And of course, because of these similarities, and Aonuma’s own comments, a lot of people have been sharing their expectations for this unexpected sequel, with many hoping we’ll be blessed with an extremely dark, unsettling, gritty and depressing Zelda adventure. Like Majora’s Mask.

Because Majora’s Mask is all about it’s sad and depressing atmosphere, right?

Well… No. Not exactly.

Yes, Majora’s Mask is a “weird” game. It’s dark. It’s dull. It feels oppressive to play. And it’s depressing. Really depressing. But that’s not all it is, and I feel that when a lot of people say they want another game like Majora, they tend to gloss over the other side of the game that’s just as, if not more important: that of hope, salvation and happiness.

Happiness? In Majora’s Mask? Allow me to explain.

As the player, everything you do in Majora’s Mask is done with the intention of saving the land of Termina from its impending destruction. And sure, to do that you need to go through some really creepy and messed up scenarios, while the ever present threat of the falling moon looms over you no matter where in the world you happen to be. But at the end of the day, you’re trying to save everyone. You’re trying to save the world and put an end to the oppressive cycle that you and the people of Termina are trapped in.

And at the end of the adventure, you do just that. You break the 3 day cycle and reach a new day, with the world saved and everyone rejoicing, having overcome the seemingly hopeless apocalyptic threat that you’ve spent the entire game afraid of. 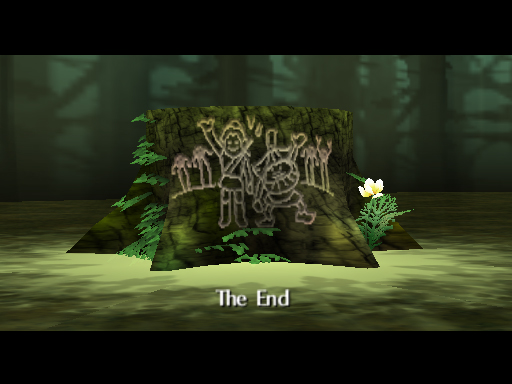 But that’s just the main quest, and is just scratching the surface of the main point I want to make here. Because the bulk of Majora’s in-game content can be found in it’s side quests, which primarily revolve around helping out the distressed and depressed residents of Termina who all have their own problems or unresolved issues during this apocalyptic time. Whether it be cheering up the depressed troupe leader in the Milk Bar by playing him a song or reuniting the lost lovers, Anju and Kafei, almost every side quest you do ends in bringing happiness to others. 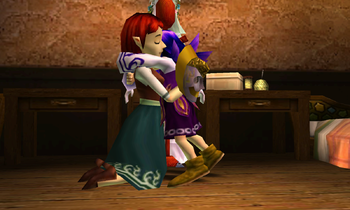 And it’s this reason that Majora’s Mask is my favourite game in the series, and arguably my favourite game of all time. Yes, I love the game for it’s gloomy atmosphere and all of the weird, messed up shit that happens throughout the course of your adventure. Yeah, I love the unique and well developed setting of Termina and how fleshed out the townsfolk of Clock Town feel due to their ever repeating schedules. I love the dungeons. The puzzles. The music. Everything. I love it all.

But what I love the most about this game, and why it’s my favourite, is that it’s a game about bringing happiness to others in the darkest of times. When everyone is at their lowest point, and all hope seems lost, you the player can step in and make a difference. You can bring a bit of happiness into their lives, even if just for a moment. In spite of the fact that you yourself, have little to gain from doing so. That you were on your own adventure, trying to find your own happiness, yet you put everyone else around you before yourself. Because it’s the right thing to do.

It’s a theme that’s always resonated with me ever since I first played this game as a kid. Throughout my life, I’ve always tried to be the good guy. The guy who brings a smile to other people’s faces. The friend that’s always there in the darkest of times, that just wants the people in his life that he cares about to be happy. In spite of whatever is going on with him at the time.

I’m not completely selfless, nobody truly is, but I often put the happiness of others before myself because it’s just what I like to do. I like to see people smile. And Majora’s Mask is a game where I can make people smile, during the worst possible time in their life, when their world is about to end.

At this point, I’m not quite sure what I want to do when it comes to my future. I have some very vague goals in mind, but I have no idea where I’m going or where I’ll end up in the end. To be completely honest, it’s kind of scary. And it worries me.

But if there’s one thing I do know, it’s that I want to make people happy. I want to keep being there for the people I care about and bring happiness into their lives. Whether that be through my stupid and unfunny sense of humour, being a kind person, being a good friend or simply being there, I want to be as positive a force as I can be to those who matter most to me. Even if it’s at my own expense. Even if I gain nothing in return. Even if, like Link, I’m still searching for my own goal at the end of it all.

I don’t know what kind of game we’ll get from this Breath of the Wild sequel, but if it’s going to be like Majora’s Mask, I sure do hope it has just as much hope and happiness as it does doom and gloom. Because being able to experience that again, on a much larger scale, would be fucking awesome. And it’d mean the world to me.

Majora’s Mask is a constant reminder of my own desire to be a hero and bring happiness to others in video game form. And it’s amazing. It’s truly, fucking amazing.

And if you haven’t played it before, you should. Maybe you’ll find something to smile about. I know I did.