When it comes to telling a good story in Anime, how important is it that said story is unique?

For a lot of viewers, perhaps even the average viewer, uniqueness is very important. After all, shouldn’t every show strive be it’s own thing and do something unique in an attempt to stand out from it’s peers?

These are words that are often used to describe Hundred, and they’re not wrong. When compared to other shows of it’s type, Hundred is far from unique and it brings very little, if anything, new to the table. It’s one of the most derivative shows I’ve watched in a long time, and pulls just about all of it’s ideas from a ton of other series that predate it. 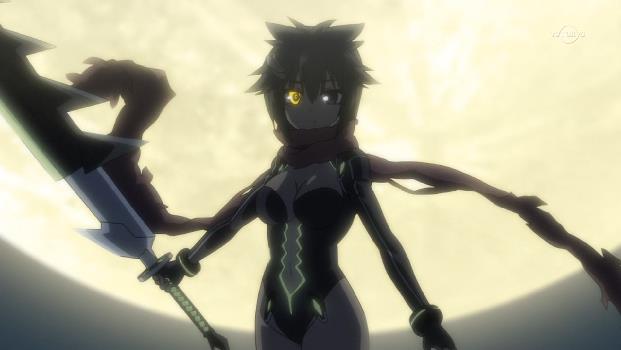 Hundred is far from amazing. It’s characters aren’t all that well developed, the story doesn’t really go anywhere because it’s a 12 episode adaptation of a still ongoing series of Light Novels, and the setting, while interesting, isn’t all that fleshed out or explored. And as I said above, most of the shows ideas are things that we’ve all seen a hundred (heh) times before.

Normally, these issues alone would be enough to catapult Hundred into bad Anime territory. I can definitely see why this show was among the recommended “terrible” Anime I was given for this challenge. I mean, how can a show be so lacking in all of these areas, and more, and still be something worth your time?

But we’ve established before that I’m not normal. I’m weird. I tend go to against the grain. And I have stupid opinions.

Because in spite of all of these flaws, and the shows lack of uniqueness, I actually think Hundred is a good Anime.

Yeah, the story isn’t anything new. It takes place in a world that is constantly under the threat of giant monsters, known as Savages, and focuses on the human army, the Slayers, who use specialised weapons named Hundreds to take them out and protect the innocent. The main character, Hayato, just so happens to be special because he has an insanely high compatibility level with Hundreds, making him a super soldier who can more or less go toe to toe with the strongest Slayers. And he’s just been enrolled at the Slayers academy. Hayato also has a roommate, Emile, who’s definitely not a girl and who he definitely has no previous connection to whatsoever. Of course there’s plenty of fan-service thrown in too because this is a show with cute girls who are all in love with Hayato. … It’s all fairly typical stuff. But honestly, that doesn’t matter all that much to me because the show still manages to be fun despite that.

And a lot of that fun comes from the characters. Outside of Hayato and Emile, they don’t really develop or grow all that much, as I mentioned before, but they’re all fun characters and they’re just brimming with personality. And while they aren’t the most unique characters in the medium, they some amazing chemistry together, and it’s this chemistry that makes the cast the shows biggest strength in my opinion.

Hayato is your typical do-gooder who always wants to do the right thing and who’s always there to save the day with his ridiculously strong super powers. And Emilia is the usual childhood friend who has feelings for the main character, who’ll do anything to protect him and will get jealous of any other females that come into contact with him. But the chemistry between these two characters, and the romantic relationship that they develop over the course of the series, is incredibly charming. Seeing the two of them get together at the end of the series was immensely satisfying and just really heartwarming. 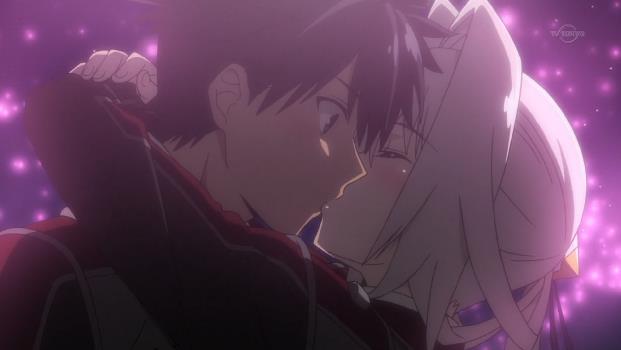 And this sort of thing rings true for just about every member of the cast, with a few exceptions. I don’t mind if a shows characters aren’t unique, so long as they have personality and have a natural chemistry with the other members of the cast that makes sense and is entertaining to watch. And that’s what Hundred always gets right when it comes to it’s characters.

But the characters aren’t the shows only saving grace.

While the concept of Hundreds, specialised, super powered weapons used to take down giant monsters, is nothing new, the show does a pretty great job when it comes to the creativity of the weapons themselves and how they’re used. Sure, Hayato has the pretty typical main character weapon: a sword, but the other characters have some really creative and unique weapons and abilities that make for some interesting fight scenes. Emilia’s Hundred can morph into just about any weapon she can think of, which makes for some excellent fight choreography every time she’s involved in a battle. Claire’s Hundred is a series of a cannons that can also turn into a sniper rifle. Erica’s Hundred is a yo-yo which can transform into chains that can bind her enemies and prevent them from moving.

These creative weapons are what drive the shows action scenes and allow for some really interesting fights, which is where the bulk of the series entertainment value lies outside of the character interactions. For a series that was sold to me as “dumb, action heavy, fan-service shit”, there’s a surprising amount of depth and strategy to the battles. One notable instance is when the villains of the story are able to use the rainy weather to their advantage when battling against Claire, due to the fact that her Hundred isn’t as powerful in the rain due to it being a plasma based weapon.

And yeah, the art and animation are also pretty fantastic too. The character designs are pretty great (with some top tier waifus) and the show looks great for the most part, especially during the fight scenes. Although, around the last third of the series, it did feel like things started to get a little weaker in this department.

In fact, the show in general just kind of started to fall off for me towards the end. It sort of felt like they just started throwing a bunch of random bullshit into the plot to allow for a big epic fight scene with tons of monsters, but it just ended up feeling kind of flat and not all that interesting. I guess it didn’t help that the Big Bad of the season was the central threat for these final episodes and she… Isn’t really all that interesting… At all. Her henchmen, who were the villains of the previous arc, were all far more interesting characters with an explored backstory and personalities, but she just felt… Really lacking in anything really and it kind of put a big downer on the final arc for me. But thankfully the scene at the end between Hayato and Emilia managed to make up for it. Some what.

There’s also plenty of fan-service throughout the show too, and while this may be a turn off for a lot of people, I personally don’t mind it too much. A lot of the time it’s pretty funny and often relates to what’s actually going on. It’s pretty organic and rarely feels forced, and I’m certainly not going to complain because… Reasons…

And honestly, I’m not too sure what else I can really say about Hundred. It’s not amazing, but I honestly expected this to be worse. A lot worse. But it’s honestly not that bad. It’s good even. It’s a fun time for what it is, and I’d watch it again if I had to. I’d even be open to a second season, but that’s neither here nor there.

If anything, Hundred is proof that a show doesn’t have to be unique or groundbreaking to be an enjoyable watch and worth your time, and as the start to this “terrible” Anime challenge, it’s a good one.

…But I’m sure I’ve just gotten lucky with this one.

Next up is Akikan, a series that’s apparently about soda cans that can turn into Anime girls. For some reason. Oh boy. Exciting stuff!

If you want to follow the action more closely as I journey through each of these shows, you can find the live reaction Twitter thread here. You can also find a description of this challenge, and a list of all the shows, here.

And you can find my final score for Hundred and every other Anime I’ve watched on my horrendously incomplete MyAnimeList page.