Note: It probably goes without saying, but this post contains some spoilers for Magical Girl Site.

I suppose I should preface this post by saying that I’m going to be getting really personal with this one. In fact, I’d say that this is without a doubt the most personal post that I’ve ever written for this blog. I’ll be discussing some pretty upsetting things as a means of defending the series in question so if you’re not into that kind of stuff, personal or otherwise, this probably isn’t the post for you and I recommend giving this one a miss.

During the Spring Anime Season earlier this year there were a countless amount of shows released that caught the attention of the masses for various reasons. My Hero Academia Season 3 was extremely popular and well received, continuing to exceed the expectations of both fans and decriers of Shounen alike. Tokyo Ghoul: Re on the other hand continued to disappoint and anger fans of the Manga by skipping key chapters from the source material while also completely alienating and confusing Anime exclusive viewers who had no idea what was going on because lolstudiopierrot. And the Ashita no Joe Anniversary project in the form Megalo Box garnered a ton of positive attention due to its unique retro aesthetic and simple, but action packed, storyline.

But one show from this season received an entirely different form of attention. One that made the show stand out from everything else that was coming out at the time. A form of attention that went beyond the show simply being “good” or “bad” for X reason and that was instead focused on one single, negative emotion: That of genuine hatred.

And that show, was Magical Girl Site.

People didn’t just dislike this show because they thought it was bad or because it wasn’t their thing. People showcased a real hatred towards this show and everything that it stood for. From calling it the equivalent of a “2D snuff film” to claiming that people who liked the show supported bullying and were sadistic individuals with no moral compass, the community really had it out for this one and even more so for the people who didn’t hate it.

And while I can’t necessarily blame people for being so disgusted by Magical Girl Site and what it represents, I do feel the need to provide a defense for this show because I feel that my perspective has been less than provided for. I feel that, at the very least, I should try to shed some light on why someone might find this show appealing because, outside of people saying that they enjoyed it ironically, nobody seems to be doing so.

So I guess my stance on this show should be more than obvious. I like Magical Girl Site. Truth be told, I love it. So much so that it’s become my favourite series in the Magical Girl genre and it’s currently the only show I’ve watched from the many Anime series that have come out of this year that I’ve given a perfect score to. I already really liked this show back when it first premiered and I made no secret of that, which led to a lot of morally superior morons (some who were friends at the time) harassing me for my opinion and telling me that I “advocated” the terrible events that happened in this show, when honestly that couldn’t be further from the truth.

In fact, the whole reason I enjoyed Magical Girl Site as much as I did was because of how much I didn’t agree with the horrible things that happened in the series opening moments and how much of my past self I saw reflected in the shows protagonist, Aya.

Why? Because, as cliche as this sounds, in a lot of ways I was Aya when I was growing up. Yes, I enjoyed the show because it had an engaging story and because it had some really cool ideas and was a unique, more tragic execution of the Magical Girl formula. But what I got most out of the show was how much it spoke to me on an extremely personal level.

Throughout my time in high school I was bullied relentlessly because I was a quiet, socially awkward teen who was an easy target and who didn’t know how to fight back. Just like Aya, because I chose to keep to myself and because I didn’t know how to properly interact with those around me due to severe anxiety issues I’d developed, most likely as a result of a pretty sheltered upbringing, I was subjected to years of near daily torment.

My friends did nothing. The school tried to intervene and ultimately did nothing. I couldn’t tell my family because I was an awkward idiot and I was afraid that they wouldn’t understand or that they’d just make the situation worse. I was afraid. I was alone. I had nobody to save me from my misery. I was literally terrified to go to school half the time. There were many nights where I couldn’t sleep. What little self-confidence I had left was completely shattered by my tormentors and I just couldn’t deal with it.

Magical Girl Site’s depiction of bullying is a lot more grim and far more devastating than anything I went through. I was never tortured by a sibling, I was never almost raped and my cat was never killed or anything crazy like that. But that doesn’t make any of the horrible things that happened to Aya or the feelings that she had about herself and her life as a result of her misfortunes any less of a parallel to what happened to me and the feelings that I felt myself back then.

A lot of people harshly criticised the opening episode of Magical Girl Site for how it depicted Aya’s bullying in a way that was overly graphic, sadistic and just plain disturbing. And while I can understand why this would trigger a lot of viewers and turn them away from the rest of the show, I also feel that the gruesome and almost cartoonishly evil nature of these scenes only helped to drive home the core message lurking behind them more effectively.

Because the reality is, bullying is not a nice thing. It’s horrible, it’s gruesome and it’s brutal. In the real world, bullying is often fairly graphic and sadistic and it’s something I wouldn’t wish on any person growing up. Call these scenes “edgy” if you want. Feel free to say that they’re “disturbing” if you so wish. But remember when you do that that’s what bullying is. Aya’s struggles and broken mental state as a result of them and her attackers grinning like supervillains as they belittle her in every way imaginable are exactly what comes with bullying in the real world.

Aya’s struggle with bullying and her shattered mental state as a result of it really resonated with me, and I’m sure it also spoke to many others who suffered a similar experience when they were growing up. Yes, it was gut wrenching and sickening but that’s the intention and that’s what makes it effective.

A lot of people have criticised Aya’s character as “lazily written” because she supposedly lacks a character at all, but that’s kind of the point, at least in the beginning. Aya lacks a character because it was taken away from her through months of daily beatings, name calling and abuse and literally turned her into a shell of a human being. This is pretty evident when we see her in a flashback before the bullying started and she actually had more of a personality, albeit a shy and awkward one. And as the series progresses, she starts to regain her humanity because she’s able to move past her issues.

And while we’re on that subject, I guess I should just jump straight into my next point since I have one more thing to talk about.

Once the show progressed beyond the opening episode, it began to relate to me in a whole other way that caused it to earn a place in my favourites list, due to one particular aspect.

You see, prior to meeting Tsuyuno, Aya had little to live for and even less things that made her happy. She was a weak, timid victim who was incapable of standing up for herself and who had so little confidence that she could barely function as a member of society. But once she met Tsuyuno that all began to change. Suddenly, Aya had a friend who was willing to protect her and embrace her awkwardness. Over time they became best friends who were willing to do anything for one another until their feelings eventually blossomed into a genuine love for one another. Through this love, Aya was given a new outlook on life and finally had a reason to rise above the negativity in her life. She even found a little bit of courage and confidence within herself that she wasn’t even aware was there and actually managed to stand up to one of the bullies from her past because of it.

And it’s this relationship that ended up being the best thing about the show for me because it’s pretty much what happened to me as well.

I too met someone who became my friend and ended up helping me work through my issues when nobody else was able to. She made me realise that I wasn’t as pitiful as I thought I was and taught me to believe in myself. She made me feel loved in a way that no one else was ever able to do before and she helped me find confidence where there previously was none and even helped me in my battle with social anxiety. And while my anxiety and lack of self-belief is still something I struggle with to this day, even during this exciting time in my life that is full of adventure and social interaction, that friend is still with me every day to remind me that I don’t have to be afraid and that I can do this. That friend of course, is none other than my wife who I love very much. She’s my Tsuyuno, and she always has my back. No matter what and no matter how little I think of myself. 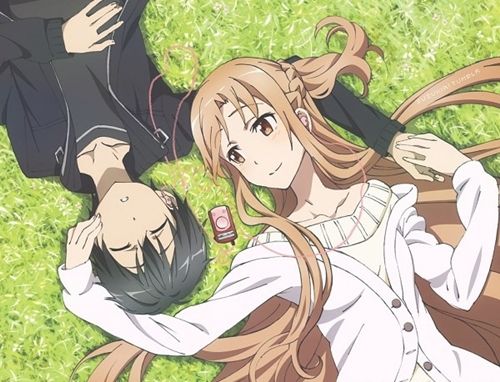 I can understand why someone might write this one off as “just another one of those dark and violent Magical Girl shows”, but the fact that the majority opinion seems to be “this show has no substance and is just gory edgelord material” just kinda rubs me the wrong the way because it’s so much more than that. At least to me.

As someone who struggled with many of the same issues as Aya, Magical Girl Site related to me in a way that very few shows ever have. Surely that must count for something. Right?

Or maybe I am just a terrible person after all.

What were your thoughts on Magical Girl Site? Did you enjoy it? Or was it just some edgy stuff to you?

Please consider supporting the blog on Patreon to help support my wife and I’s travelling lifestyle and help towards improving Lethargic Ramblings and its content. You can find the page here.

For those who may consider pledging in a less demanding way, I also have a Ko-Fi account which you can find here.

Regardless if you pledge or not, I appreciate any kind of support you guys throw my way, even reading my posts alone is an amazing form of support in it’s own right. Thank you for reading and I hope you enjoyed the post!

24 thoughts on “In defense of Magical Girl Site”