Disclaimer: This post is likely going to contain some form of rant. Sorry. I have a lot to say about this particular show.

Aya Asagiri is a middle school girl who is heavily bullied and physically abused both at school by her classmates and at home by her older brother. Spending every day in misery, Aya often considers suicide, but one day while browsing online, a website shows up on her computer, the “Magical Girl Site”. The site takes pity on her situation and offers her a magical stick that will grant her supernatural powers. How will these new powers impact Aya’s life and those involved in her suffering?

If the first thing you thought after seeing the above rating was something along the lines of “you’re a terrible person” or any other similar kind of moral judgement, I want to start this post out by explaining that bloody morals has nothing to do with enjoying Anime.

I like this show. I like it a lot. That should come as no surprise to anyone who knows me, given how much I’ve been hyping up this show during the build up to its release, how big a fan of the original Manga I am and how these kind of twisted, ultra violent stories just happen to “click” with my very specific personal preferences.

I’ve already had a fair amount of drama over my opinions on this series, and am still being bashed by people who seem to be constantly mounting an imaginary high horse of moral superiority because they got offended that I could possibly enjoy something so deplorable.

But to avoid this becoming a rant about morals and why I enjoy these kinds of series, go read this.

So why do I like this apparently terrible series so much? This series that is so “offensively” bad that everyone and their pet feels the need to declare how very hurt and angry they are over its cruel and extreme portrayal of bullying and physical violence.

Because I found its central focus pretty damn relatable to my own experiences as a teenager.

Now of course, Magical Girl Site’s portrayal of bullying is incredibly extreme, graphic and exaggerated as all hell. Many of the cruel situations Aya ends up in are far beyond those that you’d see happen to the typical bully victim at school, but that doesn’t really make it any less relatable or impactful to the audience. In fact, I’d argue that the over exaggeration of Aya’s situation actually does a very strong job of selling the trauma and depression she’s developed due to it, and that if it were more tame and “realistic” that much of the impact would be lost.

Sure, it makes for a very edgy and unsettling first episode, but I’d be lying if I said I didn’t feel sympathy for poor Aya. Like it or not, it’s hard to deny that the episode does an excellent job of making you understand her suicidal tendencies and feelings of depression. And while it’s frustrating to see her struggle and refuse to fight back, it makes it all the more satisfying when she finally decides to defend herself and ends up sending her bullies to their unintentional deaths.

And while we’re on that subject, that’s another thing I found to be interesting: Aya’s reaction to accidentally killing her tormentors with her new abilities. In most Anime series, a victim who just got their revenge on those who have wronged them, unintentional or otherwise, would revel in their newfound power and use it to destroy anyone who stood in their way and get revenge on the world. Yet Aya instantly feels guilty about it, and becomes paranoid that people will find out. She locks herself away in her room, questioning what she’s done and regretting it.

As for the rest of the story of the episode, we have Aya being granted her new magical powers through the mysterious, titular “Magical Girl Site”, which while unknown in origin at this point in time, is pretty interesting as a concept. It seems to be attracted to people in situations similar to Aya’s, which will most definitely mean that other Magical Girls we meet later in the series will be of a similar, messed up frame of mind. That’s bound to create some interesting conflicts down the line.

We also have Aya’s brother physically abusing her as well, which while even more unsettling and disturbing than the scenes involving the school bullies, actually has a reason attached to it. As the eldest, he’s incredibly pressured by their parents to succeed and do well in life and make the family proud, while they expect nothing of the sort from Aya. These expectations have taken a toll on him, so much so that he takes his frustrations out on Aya out of jealousy by beating her physically. You can argue all day about the reasoning behind it, but it is a reason and it’s honestly one that I don’t consider to be all that far fetched. Sue me.

The series isn’t the most original or best written story out there, and its main draw is the ultra violent and graphic nature of its content. But I also don’t necessarily think that it needs to be a super original story with a reasoning behind its dark nature, even if I personally think it does have quite a few.

Everyone seems hung up on this idea that if a story contains a lot of nihilistic ideas and is grimdark that it has to have a point to it. It’s a “dark magical girl show” so it has to be like Madoka Magica and be full of excessive, boring and dry commentary about the nature of the world and reality itself. It doesn’t have “depth”, so it’s bad by default. Herpdy derp.

I think this premiere episode had plenty to say underneath its gritty exterior. It emphasises how intense bullying and abuse can completely shatter someones mental state and the depression that comes with it, and it also explores how getting revenge on those who have wronged you isn’t all it’s cracked up to be. And the later parts of the series have plenty of other ideas left to explore. Sure, it’s nothing on the level of Madoka or Yuki Yuna, but I’ve never really cared for the drivel at the core of those series in the slightest.

Production wise, the series is also pretty great. The character designs are fairly simplistic, as is the colour palette, but they do the job fine, and fit the overall tone of the series fairly well. The animation and directing on the other hand, are where this series shines in terms of its presentation. Given the source material, I was pretty concerned over how well animated the show has going to be, but my god has it been handled well so far. The animation is pretty darn spectacular and the directing is absolutely phenomenal, and really emphasises the impact of Aya’s abuse and psychological trauma through some very clever techniques and fluid animation. You can feel everything that’s happening to Aya, and it really helps to sympathise with her. The show doesn’t feel like it’s constantly walking on eggshells. 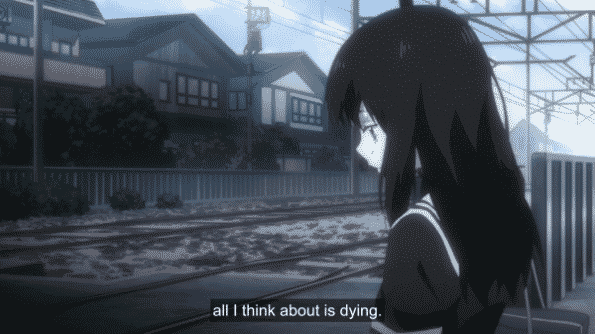 The music is also pretty great so far, and I really enjoyed the opening theme. The voice acting is also solid, and I have no issues with the cast so far. They all perform their roles well and bring the characters of the Manga to life.

Magical Girl Site isn’t for everyone. It’s a show that revels in its unsettling presentation and it’s incredibly likely to disturb the average viewer due to the brutal nature of its content. But I like it. It’s an awesomely graphic take on the genre with some interesting ideas, a relatable main character who is easy to root for and some very emotional and feelsy storytelling that, while disturbing at a base level, has a point.  It speaks to me on a very personal level that a lot of people won’t understand because they aren’t me, and I don’t really expect anyone else to feel the same way I do.

People have been quick to play the moral superiority game when it comes to this show, and have been even quicker to attack people for not having a problem with the ideas behind it, and I think that’s really unfair. It should be okay for me to like this show. It should be okay for me to not have a problem with this show. If you’re physically angered by the things in this show, don’t watch it. Switch it off and stop. That’s all it takes. There’s no need to attack people who aren’t, or wish death on the people who created it. Grow up. It’s a cartoon.

I am very sorry for ranting.

As a fan of the Manga, I look forward to seeing how this adaptation develops. This is definitely a favourite this season. Can’t wait for episode 2.

Feel free to morally judge me, and my taste, in the comments. Do so respectfully.

What are your First Impressions of Magical Girl Site?