Adaptations of a pre-existing work are pretty commonplace when it comes to the medium of Anime. While the idea of original TV Anime has become more prominent in the modern era, if you were to look at pretty much any seasonal chart, you’ll quickly notice that Anime adaptations take up the vast majority of its space.

And these adaptations can come from a variety of different kinds of source material. There’s Manga adaptations, there’s Anime based on video games and there’s even some series that are adapted from mobile phone applications.

But if there’s one particular type of adaptation that has exploded in recent years, it’s that of Light Novel adaptations.

These Anime series are adapted from a style of Japanese novel, referred to as Light Novels, which are primarily intended for a teenage audience, although naturally this isn’t the exclusive demographic. These novels tend to be the size of the average Western novel, with the defining characteristic of normally being a part of a long-running series that is published fairly regularly, with some authors publishing a new novel every couple of months.

In the modern era of Anime, an incredibly large number of the series that are coming out are adapted from Light Novels, so much so that there are many seasons where the number of Light Novel adaptations easily exceed that of the once far more popular and more common Manga adaptations.

And this surge in the popularity and quantity of Light Novel adaptations has spawned an insanely unreasonable amount of negativity.

It’s no secret at this stage, but a lot of Anime fans aren’t big fans of Light Novel adaptations. In fact, it’s pretty safe to say that the vast majority of Anime fans approach just about every single one of these adaptations with heavy caution.

Many have even gone on to claim that almost all Light Novel adaptations, outside of one or two exceptions, are “bad” and that the entire “genre” consists mostly of cliche, samey, poorly written storylines that only exist for the purpose of making a quick buck, before moving on to the next cheap, passionless, Light Novel based project.

This is a mindset I don’t agree with in the slightest.

Now, I understand the mass negativity towards Light Novel adaptations. As someone who’s read far too many Light Novels in his spare time, and has watched even more Anime based on them, I won’t deny that I’ve found a good portion of these kinds of shows to be pretty mediocre. However, this is also true for Manga adaptations, where I’ve seen just as many bland, mediocre and uninteresting series. And this is the case for just about every type of adaptation out there, at least for me.

But the sheer quantity of these adaptations, makes them seem like more of a problem than they actually are. For example, there may be a greater number of terrible Light Novel adaptations compared to that of Manga adaptations, but there’s also a high probability that the opposite is also true, and that because there are more of these adaptations as a whole, that more good series also come from them. And of course, because there’s so many shows based on Light Novels, the chances of coming across a series that doesn’t line up with your tastes is significantly higher.

But since what’s considered “good” and “bad” is more or less entirely subjective, let’s forget about all the percentages and focus on the content of these kinds of stories, along with the criticisms that are often directed towards them.

I can’t say I agree with any of these criticisms. At least not when it comes to the entire medium of Light Novel adaptations.

Despite the criticism it’s often subject to, Sword Art Online is a pretty unique take on the “trapped in a video game” sub-genre of isekai. It starts off like many of these stories do, with the characters trapped in a video game, with no means of escape and real permadeath being a constant looming threat, all while the overpowered main character slowly builds his harem through performing selfless deeds. But as the series progresses, it eventually begins to develop a unique identity of its own by dropping the harem almost entirely and developing a genuine, heartfelt romance between the protagonist, Kirito and the female lead, Asuna. The series also prematurely ends the inescapable death game, and completely shifts the focus to a completely new game world, with a completely different set of stakes that have less to do with dying and more to do with time. And that’s not even getting into how the show completely subverts the all-too-common “sister loves her brother” storyline by examining the subject in a mature light instead of fetishising it like the majority of other shows do.

Or how about Chaika: The Coffin Princess, which serves as a very unique take on the typical fantasy story where X amount of chosen heroes band together to defeat an evil overlord. Chaika takes place after such a story, with the overlord already defeated, and the noble heroes who defeated him have become corrupted by their own selfish desire for power. And the protagonists themselves? They’re hardly saints either. They’re Saboteurs, super powered soldiers for hire, who’s only purpose in the world is to participate in war, and in the now peaceful world, that is lacking in conflict, they no longer have a goal to live for and are deliberately assisting in resurrecting the evil overlord for the sole purpose of creating conflict and regaining their place in the world.

Or a more recent example: Akashic Records of Bastard Magical Instructor, which originally presents itself as a typical magical high school series with an overpowered teacher protagonist, who is quickly revealed to be not-so-powerful and terrible with magic, specialising purely in the theory behind magic as opposed to the execution of magic itself, which really changes things up quite a bit.

How about A Certain Magical Index? Do I even need to explain how its well developed setting alone instantly escalates it to a realm far beyond that of “generic”?

Say what you will about the quality of these shows, but to call them “generic” or to say they are completely lacking in creative ideas is just… Not accurate… Like, at all.

Do I even need to mention the Light Novel series that haven’t been adapted into Anime yet? HakoMari is arguably both better written and uniquely executed than the majority of Anime, and Tsukumodo Antique Shop is an insanely creative series of episodic stories with a slightly less heavy overarching narrative that is chock full of inventive ideas and well thought out plot twists. 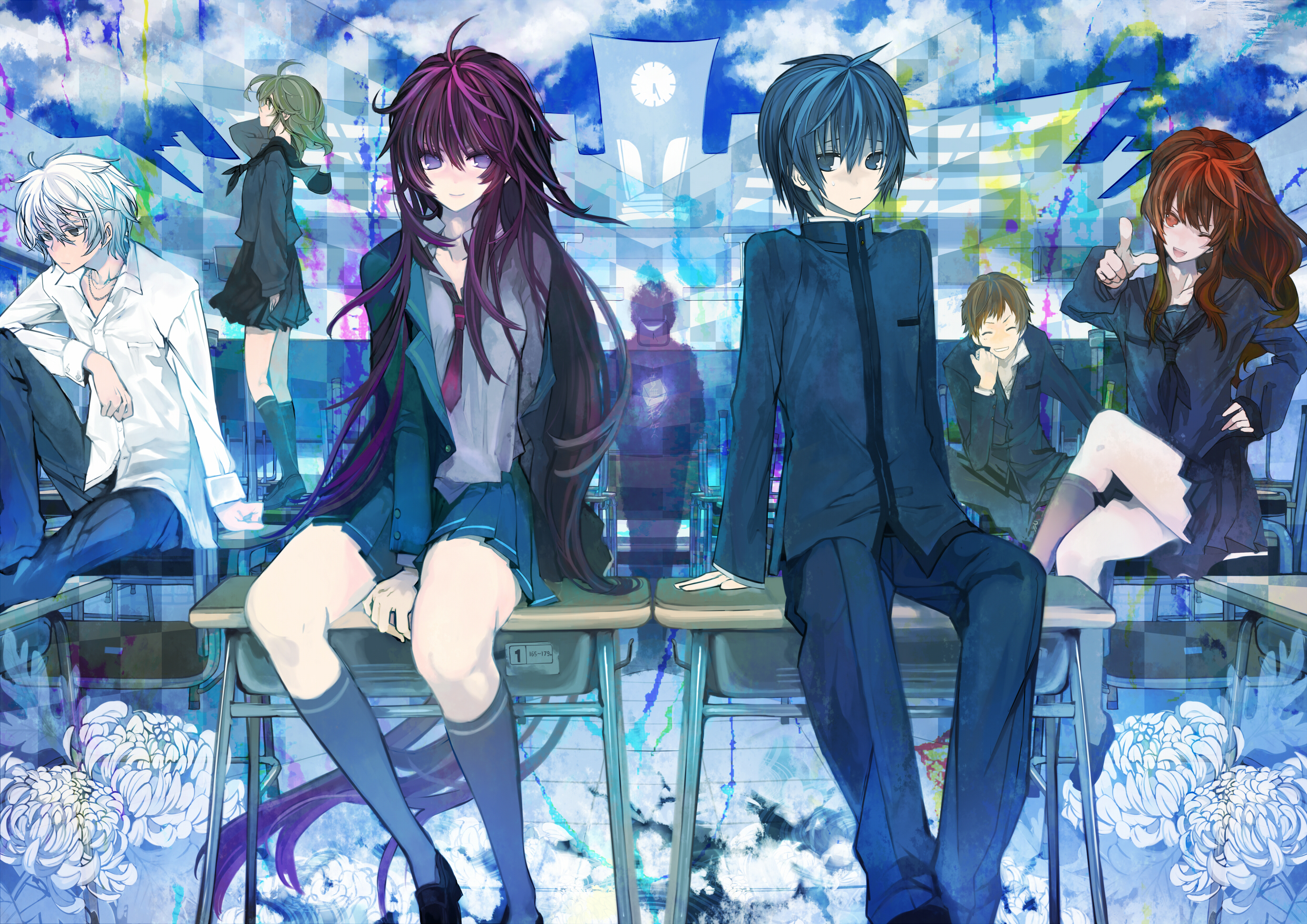 Then we have the criticism that these kinds of shows are some how uninspired, soulless, cash grabs, which is something else I find to be simply baffling. Do people really think that the people working on these shows aren’t passionate about them? That everyone involved in these productions doesn’t give a single damn about them? That nobody views these series as their passion project?

Because like it or not, someone wanted to make Sword Art Online. Someone is probably proud to have had the opportunity to work on a show like Death March. Someone is likely honoured to have played a part in the production of Is It Wrong To Pick Up Girls In A Dungeon?.

While not every show is equally well produced, due to a variety of tangible and intangible factors, to say that a show is “soulless” or “uninspired” in its presentation simply because it’s based on a Light Novel is freaking absurd. Many of the teams behind these shows put their very best efforts into them, and a lot of them have some incredibly well done sequences that are just as breathtaking as any moment from a Manga adaptation or original TV production. Just look at the minotaur fight from DanMachi and try to tell me that it’s an uninspired, effortless scene with no passion or love put into it at all.

I feel that the stigma against Light Novels and their respective Anime adaptations is pretty unfair. It’s gotten to the stage where a large number of people literally aren’t even willing to bother giving a show a chance solely because of the “Light Novel” source tag on its MyAnimeList page, regardless of what it’s actually about or how much potential it has to be something that’s a worthwhile watch.

But hey, maybe I just have bad taste. I like Sword Art Online after all. Herpdy derp!

What are your thoughts on Light Novel adaptations?

24 thoughts on “In Defense of Light Novel Adaptations”