I think, at this point, it’s no secret that I’m a humongous fan of the 2016 Anime, Tanaka-Kun is Always Listless.

Tanaka is the primary face of this blog and is largely the basis of my entire online persona. Without Tanaka, it’s safe to say that “Lethargic Ramblings” wouldn’t exist and I’d either be writing this under a very different name or simply not writing anything at all.

Tanaka-Kun is Always Listless is one of my favourite Anime, and one of the biggest reasons for that is due to how much the protagonist, Tanaka, mirrors my real life self. I’ve gone into depth about this before.

But there’s more to my love for Tanaka-Kun is Always Listless than it simply being a relatable series. One of the biggest draws for me is how relaxing the show feels to watch, regardless of the situation that’s occurring on screen.

One of the biggest problems I have with most Slice of Life Comedy shows is the way they portray their characters and the comedic situations they often fall into. Everything tends to be wacky, loud and over the top, as well as heavily exaggerated to the point that it feels a little nauseating to me.

But Tanaka-Kun is Always Listless has this calm and relaxing atmosphere in just about every single scene. The characters are all incredibly laid back, even when cracking jokes or stumbling into comedic situations. The series has this constant feeling of serenity that’s just so peaceful and calm.

Everything about the series feels incredibly relaxed and laid back, be it the soft piano melodies that play in the background or the soft manner of speaking of each of its characters, Tanaka-Kun is Always Listless is never trying to be over the top or get in your face. Even the opening sequence of the show is incredibly relaxed, playing one of the softest and most serene opening themes I’ve ever heard, accompanied by footage of everyone just chilling out and relaxing. And the humour, while often laugh out loud funny, isn’t energetic or exaggerated, but is instead delivered in a way that just feels sincere.

Then of course, we get to Tanaka himself. His character is the embodiment of laid back, due to the fact that he is constantly tired and just wants to sleep, all day, every day. From his character design and constantly deadpan expression, to his lazy personality, to his drowsy manner of speaking, Tanaka amplifies the already soothing tone of the show tenfold, and is the focal point of the shows relaxing nature. The show certainly wouldn’t be what it is without him.

And the supporting cast are all key components in creating this atmosphere as well. While they aren’t the literal personification of drowsiness, they’re all very down to earth and real. They don’t feel like exaggerated archetypes, but instead feel like real people and act as such. They’re almost like people I’d be comfortable hanging around with, and as such, they feel relatable and keep everything feeling stable.

When I watch a Slice of Life, I expect it to be a relaxing endeavor, a break if you will from the frequently busy and often chaotic world that is reality. I’m looking for a change from the loud, action-packed, narrative driven focus of the Anime that I tend to favour watching.

And every time I watch Tanaka-Kun is Always Listless, I get just that. I get something that just doesn’t care and doesn’t feel the need to get wrapped up in wacky, over the top antics, or a serious, character driven story. It’s just a show about a bunch of school kids, relaxing, and doing their every day thing, with no dramatic stakes, no tension and no real end goal beyond Tanaka just wanting to be lazy and drift through each day as it comes. 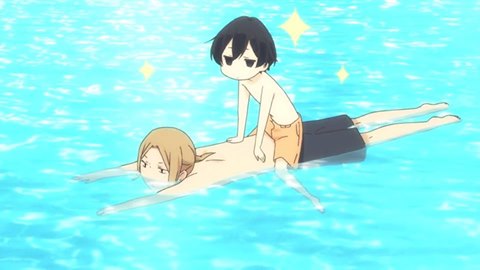 I’ve never felt so at peace and so ready to drift away to dreamland while watching a series than I have with Tanaka-Kun is Always Listless. Laying on the couch, with two fluffed up pillows and playing it on my living room TV is simply the greatest thing ever for an always lethargic guy fellow such as myself. It’s calm. It’s quiet. It’s chilled out. It’s everything I could ever want from a Slice of Life Comedy series, and I wish more shows in a similar vein would take this soft, serene approach to their presentation.

I love myself a dramatic, action-packed story, or a wacky, zany comedy, but sometimes I just want to escape into a world where I can feel at peace and don’t have to worry about anything be it real or fictional.

And Tanaka-Kun is Always Listless provides me with that world, and I love every second of it.

What are your thoughts on Tanaka-Kun is Always Listless? Did you find the show relaxing? Are there any shows that you like to chill out to? Let me know in the comments!

Interested in my scores for Tanaka-Kun is Always Listless and other Anime titles? You can find them on my horrendously incomplete MyAnimeList page.

12 thoughts on “The soothing, relaxing nature of Tanaka-Kun Is Always Listless”