Disclaimer: This post is pretty personal. Embrace yourself for some soppy, sentimental stuff.

Throughout the many years I’ve been watching Anime the shows that I would consider worthy of a spot in my all time favourites have changed drastically. I know for a fact that my Top 10 Anime from when I was 14 would be completely different from what I would consider to be my Top 10 today.

Of course that’s only natural, for obvious reasons. As I’ve gotten older my tastes have changed and expanded. My current self is open to a lot of genres I’d never appreciated when I was younger and there’s a ton of stuff from my teenage years that I just can’t watch any more because it no longer resonates with me like it used to.

I have a very different mindset from my teenage self and I’ve changed a lot over the years which has had a massive impact on my preferences and what I look for in a favourite series.

Outside of a few changes, my current favourites list has more or less been stable since 2014. But every single show that’s currently on there would never have been there when I was younger. 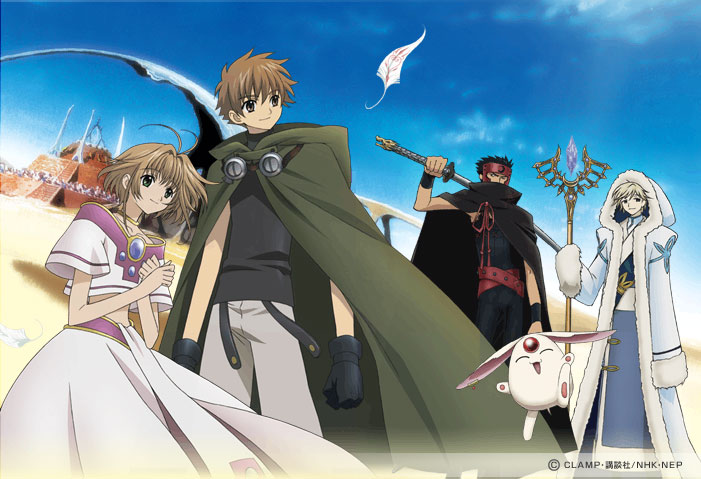 Way back in the Summer of 2007, Tsubasa Chronicle became my favourite Anime. When I first watched the series I was absolutely blown away. I’d never watched an Anime this incredible before. It was like nothing I’d ever seen before.

The narrative was incredibly captivating and wrought with emotional stakes that really roped me in and the protagonist Syaoran’s loss of his relationship with Sakura was something that heavily reflected my own circumstances at the time. I was able to connect  deeply with his quest of travelling across dimensions to recover Sakura’s memories despite the fact that she would never remember the bond they shared. The sense of adventure, the unique and whimsical worlds that Syaoran and his companions all traveled to were an incredible escape from, what was at the time, a harsh reality.

Tsubasa Chronicle was a very impactful series on my teenage self. There were several moments where I completely broke down because of how much it resonated with me. It was everything I’d ever wanted from an Anime series at the time and the way that many of its themes reflected my own circumstances made it feel very special.

And despite my circumstances changing significantly over the years and many entries in my favourites list coming and going as time would pass by, Tsubasa Chronicle remained my favourite Anime every step of the way. Until 2014 when Hunter x Hunter (2011) came out of nowhere and blew me away for completely different reasons… But that’s a story for another time.

Yet despite no longer being my absolute, number one favourite series, Tsubasa Chronicle still sits at the top, right next to Hunter x Hunter in second place. Even after being dethroned from the top spot it remains my most consistent favourite, towering above pretty much everything else I’ve seen.

But why? Didn’t I say that my circumstances have changed a lot? That my tastes are very different?

While that’s all completely true, even today after all those changes, I continue to hold that very deep connection to Tsubasa that started all of those years ago and it hasn’t even remotely begun to loosen despite how much has changed.

Whereas previously I looked at the series’ tragedy as a reflection of my own issues as a teenager, I now see it as both a reminder of my past and a reflection of my current life situation. Because despite being a tale of two lovers who drift apart due to circumstances beyond their control, Tsubasa is also a story about a young man fighting to protect someone who’s more precious to him than anything else, and he does it selflessly. And through all the hardships, in the end the two of them find their way back to one another, despite destiny standing in their way. In the end, Tsubasa isn’t a story about lost love, it’s a story about overcoming it and forming a much stronger and truer bond that lasts forever, even if the universe itself is against you. It’s a story about two people that are destined to be together for eternity finding one another and beginning a new chapter together, and that’s something that’s become extremely relevant over the last 8 years of my life.

Because I’m now with someone who I believe to be that destined person. I have someone in my life who I’d do anything for and it’s incredible. I’ve moved on from my issues and formed a loving bond with someone who means the world to me and it’s given me a whole new outlook on life.

I haven’t watched Tsubasa Chronicle in a good few years, but I guarantee that if I were to go back and watch it again today that it would remain exactly where it is: at the top. My reasons for connecting with the series are very different to what they once were, but the connection itself and the feelings of gratitude I have towards the show remain just as strong as they’ve ever been.

I’ve changed a lot as a person. I’m not the same person I was all those years ago, and even today, I’m always changing day by day. But Tsubasa has, and always will be, something consistent.

10 thoughts on “Tsubasa Chronicle: A consistent favourite amongst ever-changing circumstances”