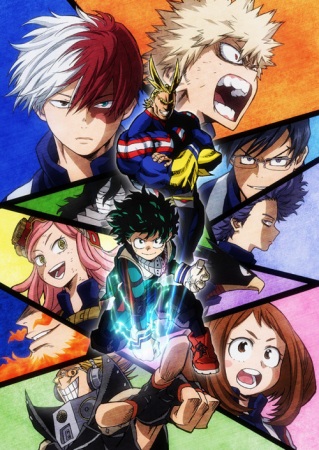 Ever since he was young, Izuku Midoriya has always dreamt of becoming a hero in a world where superpowers known as Quirks are the norm. But fate was not kind to Izuku and he was born without a Quirk, leaving him powerless compared to his peers with his dream seeming impossible to obtain.

However, one fateful day, Izuku meets his idol, the greatest hero of them all: All Might, who takes a liking to the young boys heroic attitude and bravery and chooses him to be his successor, passing down his own Quirk to Izuku in the process.

Now, with a Quirk to call his own, Izuku enrolls at UA High, the most prestigious academy for heroes in training, meeting new comrades and making new rivals along the way. However, soon Izuku and his classmates will truly be put to the test, as a malicious organisation of villains begin to make their moves from the shadows.

There’s nothing I love more than a good old fashioned Shounen Jump adaptation. I love their arc heavy story structure, I love how they execute their stories and they make up a significant chunk of my all time favourite Anime series.

And My Hero Academia is Shounen Jumps newest rising star and as such, it’s had a lot of hype to live up to.

The first season of My Hero Academia aired last year and, in my opinion, it was one of the best shows of the year. It was a gripping underdog story about a seemingly talentless individual rising above his unfortunate circumstances through sheer effort and determination to achieve his goal of becoming the best.

It’s a fairly standard template for a battle shounen series to follow, it’s very “Naruto”, but My Hero Academia managed to execute it in the best way possible: by simply doing it really well.

However, the first season ended just as things were beginning to get interesting, and it appears that with this new second season, My Hero Academia plans to come back hitting harder than ever before.

The most promising thing about this second season, is that it’s apparently going to run for 25 episodes, as opposed to the first season that only ran for 13. This is great, as it means we’re definitely going to be getting a lot more story this time, which remedies the biggest issue of the first season: it just didn’t have enough episodes.

As for the narrative itself, it seems the series is going for a more central plot this time around. While the first season focused mostly on introducing us to its setting and the large cast of characters, judging from this episode, we’re going to be seeing a lot more things happening. There’s a Sports Festival styled tournament on the way, which is bound to have a lot of awesome challenges and brawls between the characters, in a typical Shounen fashion, and there’s the ever worrying threat of the League of Villains and their leader, Tomura Shigaraki ready to kick up all kinds of chaos at any given moment. I’m excited to see where this all goes, and I look forward to seeing Izuku rise to each of these new challenges as they come his way.

Speaking of Izuku, his character arc was incredibly compelling and relatable and resonated with me immensely and I have no doubt that will continue to be the case this season. He’s certainly grown stronger and more confident since the beginning of the series, but it’s clear that the kid still has a long way to go, and I look forward to seeing where his journey takes him.

Many are brushing My Hero Academia off as a derivative work with very little identity of its own, and while I can see the reasoning behind these claims, I find them to be incredibly misguided. Sometimes, it’s not originality, but the execution of an already established formula that works, and My Hero Academia takes everything previously established by its predecessors and executes them all in the best way possible.

Is it unoriginal? A little, but the execution is outstanding and there’s enough interesting ideas and unique concepts thrown in there to make the series something truly phenomenal.

However, I do have a couple of concerns with regards to the narrative. This first episode had a large amount of flashbacks which felt a little unnecessary. While I can appreciate that these may have been put in place to jog the memory of those who may have forgotten some of the events of the previous season, there was already an entire re-cap special that aired a week prior to this episode. However, considering this season is going to be 25 episodes, this isn’t as damaging as it could have been. I do hope that the flashbacks are toned down for the remainder of the series though. We don’t need that element of Shounen Jump in My Hero Academia.

My other concern relates more to the future of the series as a whole. It’s great that we’ve been given another season of My Hero Academia, especially one that’s two cour, but will there be more? My Hero Academia is going to be running in Shounen Jump for a very long time. The Manga is currently miles ahead of the Anime adaptation and has Saga’s not unlike those of One Piece, planned out for its future. Will we keep getting this series adapted slowly, every few seasons? Or will it all end here for the time being? As someone who adores long-running Shounen Jump adaptations, I sincerely hope it’s the former because we need more of this stuff again. We’ve been deprived of these too long!

The production side of things is, of course, fantastic. Studio Bones are handling this one, and I honestly can’t imagine any other studio doing this adaptation as well as they are. The character designs are stunning, the artwork is colourful, with a unique comic-themed aesthetic, the backgrounds are beautiful, and the animation is breathtaking. While we haven’t seen anything outstanding in the animation department from this first episode, from the promotional videos, we’ve got a lot of beautiful looking stuff to come, and I cannot wait to see some awesomely directed and well choreographed fight scenes. Keep it at Bones! Hopefully the doubled episode count won’t hurt the production too much.

And of course the soundtrack is outstanding with excellent opening and ending themes. While they aren’t as good as the first seasons, they still do a great job and I won’t be skipping them.

Being a spiritual successor to the Shounen Jump classics, My Hero Academia has some big shoes to fill, and so far, with the first season and this premiere episode for its second season, it seems to be breaking into them quite comfortably.

It may not be the most original or innovative work to come out this season, but in this case the execution is so brilliant and there’s so much love and passion put into its production that it simply doesn’t matter.

My Hero Academia continues to be the hero we need in a world where quality long-running Shounen Jump adaptations are becoming more and more scarce, and I for one am glad to see it back.

Keep on flying, My Hero Academia.