Teenagers Hana Yasuraoka and Mugi Ayawa are in a seemingly normal relationship. They hold hands, they share their feelings and show their affection in public. But away from the eyes of the world the truth surfaces: they’re both using each other as substitutes for the people they really love and desire but can’t have and they harbor no real feelings for each other.  Mugi is in love with his private tutor turned music teacher and Hana desires to be with her homeroom teacher whom she’s known her whole life growing up. Unable to have the people they truly love, both these troubled teens attempt to fight their loneliness by using one another as both physical and mental crutches, as they both secretly hope that their forbidden fantasies will one day become a reality.

I love dark and twisted stories that focus on troubled characters with dark desires who wind up sending themselves down the path of complete and utter self-destruction. But given the often optimistic and lighthearted nature of the majority of Anime, coming across shows that completely fit the bill of “dark and self-destructive” is quite the rarity.

Scum’s Wish is such a rarity. It’s an incredibly dark and brooding story focusing on the psychological and mental scars of two teenagers that are completely torn apart by the fact that they can’t be with the people they love.

And what makes Scum’s Wish such an interesting and incredible work of fiction is the way it handles such a premise. Normally a series about forbidden love would be played up for laughs, yet this show takes a very mature, dark and realistic approach to the subject. Having a crush on, and lusting after, your teacher is pretty messed up and it’s considered morally wrong by our society and Scum’s Wish holds these taboo thoughts in the same light.

This is a story that is incredibly depressing and somber and nothing is played up for laughs in the slightest. And for a show that’s about two teenagers using each other, both physically and mentally, to satisfy their urges and help to cure their loneliness, that’s exactly how things should be. There’s nothing to celebrate or be happy about here because the central idea of the show is about two people lying to themselves. And to make matters even worse, both of them are completely aware of it and just don’t care in the slightest.

It’s all a very interesting narrative with some incredibly hardcore emotional and dramatic stakes. These two kids are literally setting themselves up for complete and utter despair and it’s already being made very apparent that absolutely nothing good is going to come from their situation. They’re both playing with their own, and each others, feelings and to top it off, things are already beginning to get physical which only further serves to enhance the stakes to unimaginable heights. And this is the first episode.

To make things even more interesting, the two main characters Hana and Mugi are both completely self-aware of their own self-destructive nature and the misguided path they’re heading down. Hana especially is completely disgusted by her own forbidden feelings, and she’s completely aware how messed up her situation with Mugi is.

Both Mugi and Hana also have a very interesting chemistry with one another. While the selfish nature of their relationship leaves much to be desired, they’re two incredibly damaged and hurt kids who want the same thing: to be loved in return by the ones they hold true to their hearts, and this makes for some interesting interactions between the two. Of course their relationship is one of the biggest causes of the depressing mood throughout, with a specific scene where the two of them nearly have sex with one another being particularly depressing. They both deliberately avoid looking at each others faces to imagine their crushes as they get physical, and it completely emphasises the harsh reality that there is no romance here: only lust and lies.

In terms of visuals, Scum’s Wish is also very spot on. The show has a complete lack of glamour in its production and has a very limited use of colour which only serves to enhance the general tone and feeling that the series is going for. This is all coupled with some incredibly breathtaking and well-timed shots, fantastic directing that conveys the atmosphere of each scene perfectly and a whole array of absolutely gorgeous character designs. A show like Scum’s Wish doesn’t have to look good to tell its story, but regardless Lerche has pulled no punches and has made the show a visual masterpiece. I genuinely feel that this show is their best looking work to date, and while I have some concerns that they’ll be able to maintain this quality for the entirety of its run, I’m very impressed. Lerche even took the liberty of going completely uncensored, with the show having scenes that could be referred to as borderline explicit. It never quite reached Berserk levels, but it’s the next best thing and it’s completely true to the Manga, something I was afraid they wouldn’t do. But they did. And best of all, they handled it respectfully and maturely, while still maintaining its dark purpose in the narrative. It’s handling the subject matter in as sensitive a way as possible, yet it’s still hard hitting and filled with a ton of raw emotion.

And to further add to the outstanding presentation is the soundtrack, which perfectly conveys the mood perfectly through both its composition and its limited usage. The best moments in this show are the quietest ones and it’s a minor detail that really sat well with me.

Scum’s Wish isn’t a show that will appeal to everyone. In fact, I’d go as far as saying that it will only appeal to a particular niche of people. There’s a lot to be turned off by in this show, from the constantly melancholic atmosphere, to the focus on a false relationship formed on the basis of forbidden love. But I love it all and I feel these elements come together perfectly to create what is arguably the best show of the season.

This episode was incredible and I have no doubts that this show will continue to be amazing. I was completely blown away and that’s a rarity. 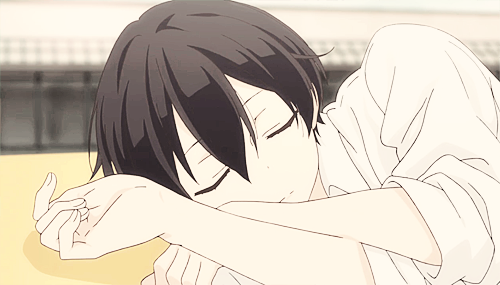 What are your first impressions of Scum’s Wish?